Most Dangerous Intersections in Washington, DC

These are the most dangerous intersections in Washington, DC

Although the city has a reliable public transportation system and a strong and growing community of bicyclists, the number one mode of transportation around Washington DC is still the automobile.

Every day, tens of thousands of Washingtonians take to the streets to head to work or go to the supermarket or numerous other destinations. Add to that the number of drivers who come into the city from outside either for work or to see the sights of our nation’s capital and you have a large amount of vehicles surging through the city at any given moment. And a lot of cars on the roads means the possibility of accidents, either between two or more automobiles, or between a car and a pedestrian or bicyclist. Indeed there are a number of crossroads that either as a result of their original design or through happenstance have become some of the most dangerous intersections in DC.

Of course, that number of cars out on the roads means a heightened chance of possibly getting into an accident, a possibility that is increased when one takes a look at the number of dangerous intersections to be found in the district. But before you get to a position where you may need an attorney who specializes in automobile collisions, let us take a look at the most dangerous streets and intersections to be found in Washington DC.

One of the most hazardous streets in all of DC is 14th Street. Cutting a north-south swath through a busy section of Columbia Heights, the stretch of 14th Street between Quimby Street to the north and Harvard Street to the south has been noted for having numerous dangerous obstacles. While it is against the law for cars to stop or park in a bike lane, there are sections of 14th Street where rideshare vehicles used by Lyft or Uber drivers will move into a bike lane to pick up or drop off passengers. These create obstacles for bicyclists, potentially causing them to have to swerve out into traffic and harm’s way.

Towards the southern end of the strip between Quimby and Harvard is the intersection of 14th Street and Columbia Road NW. This crossroads is particularly dangerous, with 79 reported crashes here between 2015 and 2020. Of these accidents, eight involved pedestrians and four involved cyclists. The District Department of Transportation made some improvements along this stretch in the summer of 2020, but it is too early to see if they have had any efficacy.

But these aren’t the only intersections along 14th Street that one should be wary of. The intersection of 14th Street and Irving Street is problematic due to the large amount of pedestrian traffic going to and from the Columbia Heights Metro Station on the Southwest and Northeast corners of the intersection. Serving both the Metro’s Green and Yellow lines, the station is one of the busiest Metro stops outside of the subway system’s main downtown destinations..

Another dangerous intersection along 14th Street is where it crosses over with Park Road and Kenyon Avenue, just one of the many five point intersections around the city. The stretch of 14th Street between H Street and L Street saw some 30 collisions between drivers and pedestrians between August 2016 and August 2019.

Although a mile south of the worst parts of 14th Street, the intersection of 14th and U Street has also made numerous appearances on lists of worst intersections across the district for over ten years now.

The Most Dangerous Intersections in DC 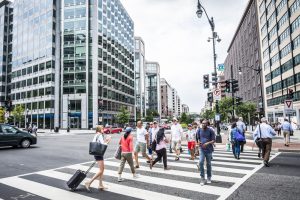 Over the last couple of years there have been a number of different studies that looked at vehicle safety and the danger posed by various Washington DC intersections. Not all of these studies agree on the worst intersections in the city, most likely due to differing methodologies in the studies and shifting traffic patterns. But there are some intersections that show up again and again on lists of most dangerous for crashes.

As two of the major thoroughfares leading into the city, some 75,000 vehicles travel through the intersection of Bladensburg Road and New York Avenue on a nearly daily basis. Between 2010 and 2012, there were 226 crashes in this vicinity, or roughly 75 a year. By 2018, that number had more than doubled to 165 car crashes as vehicles rush along the four lanes in each direction in and out of the city.

Florida Avenue, New York Avenue and First Avenue NE wasn’t intended to be a traffic circle, but it did wind up as one. Originally, the streets were at the edge of Washington planner L’Enfant’s original 1790s plans, and the unplanned urban growth that followed over the next two centuries ultimately led to the dangerous intersection it is today. Situated on the outskirts of the district’s city limits, New York Avenue is often fairly congested, acting as it does as a major east-west artery between the city’s Northeast and Northwest sections. (The fact that there has been a Wendy’s restaurant in the middle of the conjunction of these three streets has led locals to dub it “Dave Thomas Circle,” after the fast food chain’s founder and former TV spokesperson.)

Located on the edge of the Federal Triangle, the intersection of 12th Street and Pennsylvania Avenue finds itself seeing a lot of pedestrian foot traffic thanks to such nearby tourists attractions such as the Smithsonian Museum, the Federal Bureau of Investigation Headquarters and the National Archive.

The intersection where 7th Street, K Street and Massachusetts Avenue all converge is one of the more dangerous of the many star point intersections that can be found throughout the district.

Minnesota Avenue and Benning Road – The Most Dangerous Intersection

For Washington DC residents, the intersection of Minnesota Avenue and Benning Road and its combination of high speed vehicular traffic and voluminous pedestrian foot traffic has had a long history of being regarded as one of the district’s most dangerous crossroads. No less than Time Magazine backed up that belief in 2018, when it named the crossing the most dangerous intersection in DC, based on an analysis of ten years of traffic data. More recently, a GG Wash study of Metropolitan Police Department data, there have been 211 total vehicle crashes between 2015 to 2020, eleven involving pedestrians and six involving bicyclists.

In the summer of 2019, the Washington Metropolitan Transit Authority had initiated some improvements designed to better manage the flow of traffic through the intersection. The efficacy of those improvements remains in question though, as the intersection has shown no downward trend in the annual number of accidents.

Obviously, no one wants to be an accident statistic. To avoid a car crash, bicycle crash, or pedestrian accident in DC, follow the rules of the road and avoid distraction. Always enter an intersection at a slow, controlled rate of speed. Be aware of your surroundings, because another driver might not be. Keep your distance from other cars and when you are changing lanes, don’t forget to use your turn signals to show your intent.

According to some studies, many of the pedestrian injuries that have happened in these intersections is because those crossing the street on foot were not paying as much attention as they should to their surroundings. Instead, they were reportedly paying attention to their phones. Crossing the street on foot generally takes less than a minute; you can surely go without looking at your phone’s screen for that long. It may just save you from an injury or worse.

But what happens if you are in an accident while traversing any one of the or any other intersection in Washington DC?

First off, make sure you get the insurance information from the other driver or drivers involved in the accident. You will need this to file your insurance claim with your company. Secondly, seek medical attention in case you have received any injuries in the accident. Even if you think you are fine, it is important to confirm that is the case. Conversely, if you received any broken bones or other injuries, you will need to document them as being the result of the collision for your claim. Finally, make sure that the accident has been reported to the police, as a police report may come in handy for any legal action you may wish to take later.
If you or someone you know has been injured  in a car accident while driving through one of these most dangerous intersections in Washington DC, it may have been due to the negligence of another party. To explore your legal options, you need a trusted local attorney by your side. The team at Regan Zambri Long PLLC has years of experience helping people in your situation find justice. Contact us today for a free case evaluation.